Is it the Son ?  Another offspring of our native star ?  Below I have compressed almost an hour of Sunset from July 5, 2015 to a little over six minutes.  A few minutes into the video a Solar filter is used like you would use when viewing  an eclipse.  Then Infrared is turned on briefly. The video then returns to normal display of the Sun setting with Manhattan as the backdrop for the evocative event.

Psalm 97:2 "Clouds and thick darkness surround him; righteousness and justice are the foundation of his throne" (CJB)

July 23, 2015 to July 31, 2015  Multiple Dual  Sunsets over New York City.  This is a subset of Original photos taken 60 photos an hour.   A few days in the date range were missing from the camera for unknown

reasons.   No objects added but contrast brightness levels were applied to bring out detail.   These display  1  seconds per frame.

The second object is usually visible starting a couple of frames right before the Sun sets.  If music plays while you are viewing this, it is from an older YouTube video  at the bottom of the page.     CLICK the ARROW on RIGHT to start slideshow. 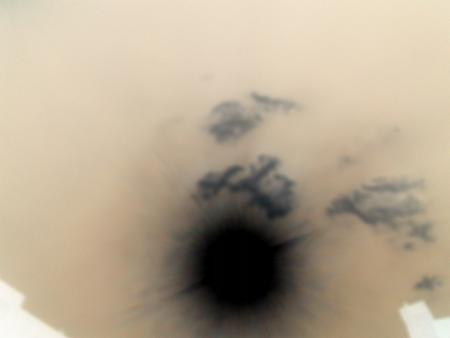 For more information, check out Books on Amazon:   "The Return of the Sun; the Second Sun"  and
"Unusual Photos Taken of the Signs..."

Most Recent Sunset is above, Previous Sunset Videos are Below , Oldest on top. New ones are added to the bottom of the page as the current one is changed.

The below photo of the Sun taken in 2013 and Inverted. The objects around the Sun are clouds. The picture looks to me like a man, a Magician wearing an Tophat, waving his hands  over the Sun, "Now you see it, Now you don't ..."  That style hat is also worn by the Master of a Masonic Lodge along with a tuxedo.

July 12, 2015 Sunset over New York City.  Original photos taken 600 photos an hour. Culled down to 1 photo per second. About 1:45 minutes second sun is visible.  Second half of Video is repeated but with Neon Edge Detection Applied.  No objects added or other special effects.    Warning: There is YouTube music on this video.

Below are similar photos from late June early July 2015...

For more information, check out Books on Amazon:   "The Return of the Sun; the Second Sun"  and
"Unusual Photos Taken of the Signs..."

Most Recent Sunset is above, Previous Sunset Videos are Below , Oldest on top.

Many of the YouTube Videos have music so adjust your speakers.